French giant JC Decaux has been confirmed as supplier for Velov bike-sharing system in Lyon for 15 more years. What a surprise… as it was the only candidate to take over! It was actually quite a controversory market as Lyon Municipality gathered bike-share, intelligent bus stops and advertising, a unique case in France since 2009. Of course, globally, JC Decaux is the only company capable to provide all of it (Clear Channel not focusing on bike share currently). 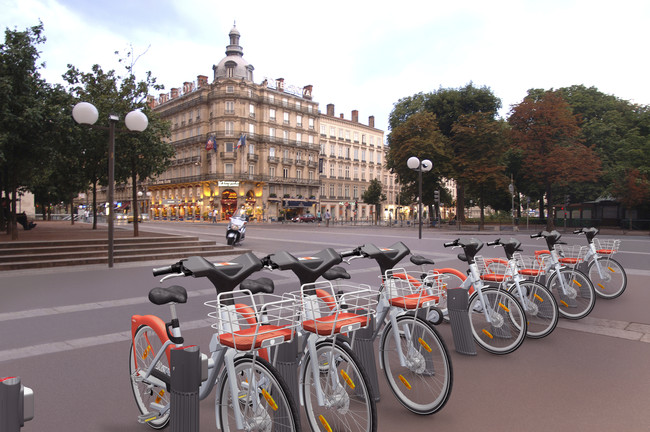 Is that a real public tender? French justice said so, as they rejected rival Smoove’s appeal in march 2016…

Some reactions show that it is not the public opinion: “JC Decaux almost has the monopoly…”

Lyon Municipality also revealed the fares changes. 31€/year (was 25€), or 4€/day (was 1.50€) ! If the yearly fare seems acceptable, even if it jumped by 24%, the daily fare is clearly not appealing comparing to 1.70€ for a bus/metro trip. It provoqued a lot of (bad) reactions in the social networks.

New bikes should feature minimalist fenders, an enigmatic “electronic lock” in both wheels, and will be 2.3kg lighter. JCD choose to maintain its singularity: the weak anchor system remains the same, with a plate 3 times stronger. As the weak point is at the weld, it will not change a lot.

Who are you, e-scooter rider ?

The French mobility engineering consultancy 6-t released last week the first study on shared e-scooter use in France. Even if 13 operators are already present here (12 in Paris only), the impact of these fast growing services are still to be fully understood. It is important to note that the study is based on Lime …

END_OF_DOCUMENT_TOKEN_TO_BE_REPLACED

Operating during the COVID-19 lockdown: Dott in France

A few shared micromobility operators chose to maintain a limited-service during the COVID-19 crisis: when public transport in major cities is not the safest mean of transportation, other shared transport options are an absolute necessity to allow healthcare/grocery store/delivery… workers to maintain vital services. Dott is still operating its e-scooter fleets in all the cities …

END_OF_DOCUMENT_TOKEN_TO_BE_REPLACED

LOM – An analysis of the recommendations for free-floating services in France.

In France, following the National Mobility Convention, the Loi d’Orientation des Mobilités (or LOM, Mobility Orientation Law) has been under discussion from November 2018 until its publication in December 2019. It was aimed to answer four main problems: the lack of mobility solutions in many territories the climatic and environmental emergency, a call to change …